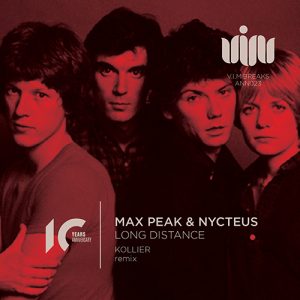 A collaboration track between Max Peak and Nycteus backed with a huge remix by Kollier on VIM Records. Get it on Beatport!

At the hotel the postman was having a drink while he waited for the girl to sign for a large forwarding envelope heavy with enclosedletters from her bank in Paris. There were three letters re-addressed from his bank, too. It was the first mail since they had sent the hotel as a forwarding address .. The young man gave 1 the postman five francs and asked him to -have another glass of wine with him at the zinc bar. The girl unhooked the key from the hoard and said, „I’ll go up to the-room and get cleaned up and meet you at the cafe.“

After he finished his glass he said goodbye to the postman and walked down along the canal to the cafe. It was good to sit in the shade after walking back bareheaded in the sun from the far beach and it was pleasant and cool in the cafe. He ordered a vermouth and soda and took out his pocket knife and slit open his letters. All three envelopes were from his publishers and two of them were fat with clippings and the proofs of advertisements.

He glanced at the clippings and then read the long letter. It was cheerful and guardedly optin:‘-istic. It was too early to tell how the book would do but everything looked good. Most of the rev,iews were excellent Of course there were some. But that was to be-expected. Sentences had been underlined in the reviews that would probably be used in the future advertisements. His publisher wished he could say more about how the book would do but he never made predictions as to sales. It was bad practice. The point was that the book could not have been better received.

Slugware (V.I.M. Breaks, Ego Shot Recordings, Kindcrime Recordings, V.I.M. Tronica)
Thank you for sharing the release, Greg!The original mix is deep and moving, while the Kollier remix in punchier and more intense. Great single, cheers to the guys for their great work!

Audio Dropout (V.I.M.Tronica, V.I.M. Breaks)
cool release, original is the pick of the 2, loving all the change ups.

Perpetual Presents (Broken Records, V.I.M. Breaks, Diablo Loco Records)
Oh Yes, Kollier remix is gorgeous rolling breaks.
Original is delicious and chilled out too.
Will be playing both versions in mixes and dj sets this summer for sure.